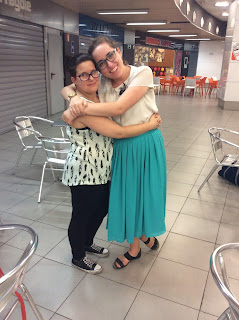 It's hard to believe that Kathleen has only a little less than 7 months until she returns home.  Here are excerpts from her latest letters.  I'm including my favorites -- Rebecca Sykes


Hola Familia:  Hope all is well with all of you at home! This week was a bit challenging. A lot of our investigators have not been meeting with us, so we hit the streets and contacted the stuffing out of them. One day, all of our lessons failed... So we had 9 lessons in the streets. Pretty crazy... Experiences like this are a little bit like taking castor oil (yes, I do realize that this is an old-timey reference). It's not that fun at first, but in the end you're happy you did it. We found some really good people, many of which are really prepared to hear the Restored Gospel.

One day when we were out contacting with a member and we got tired of contacting, so we asked him if there was someone in the area we could visit. He indicated the door we should knock and we went to find this family. Apparently it was a family that joined the church a while back -- and because of some lamentable offenses to the family -- they became inactive. The Spirit must have really been working through our member because when we knocked the door and she asked who it was, it popped right open.

Normally we have to explain what we want to do; convince them that we just want to get their number and leave our card; ask if we could come by some other day; etc. But C had been waiting for someone to come and help her. I won't go into details about her struggles, but she had really suffered from the bad decisions of her family the last few years and was in the middle of a family emergency. She had really needed to hear from us. We shared something to comfort her and prayed with her. We're going back to meet her tomorrow.

We met R this week, who is really prepared to hear the Gospel. He said he really wants to be part of a faith that focuses solely on God and our Savior and not on the bad things happening in the world. He said he's always had the question of why there are so many churches in the world and was so fascinated that we said that he could know through prayer. He was excited to know that he could get an answer directly from God. He was also happy to know that he could be completely forgiven of his sins through our Savior, Jesus Christ.

We also met with a man named B this week. He's GOLDEN. He's been looking for a church that really provides a clean environment and that... Get this... "Has the authority of God" and "Was the real church Jesus Christ established when he was on the earth." We had to pick our jaws off the ground. He kept asking questions and making comments that showed that he was really in tune with what we were going to teach him. He was so excited that he could receive an answer to his prayers and could know what was true.

We also had a funny conversation with an old investigator who in the time she was not meeting with the missionaries started meeting with another church. We were trying to meet up with her and she said that she didn't like our message because she was really confused when the missionaries met with her the first time because they had said something about there being "one true church on the earth."

She commented, "But when I go outside, there are a lot of churches! There are churches on every corner! Obviously you two are really confused because there is obviously more than one!" Hermana Cls responded with "Yes... That's why we want to meet with you. Because you're really confused..." I couldn't help but laugh.

Other interesting facts... Well I could go into how many lessons we taught this week, but I'll go into more interesting stats:

-People asking me to marry them this week: 2

-Investigators who are Muslim: About half (They're really good investigators!)

-People we met on the street who told us some story about how they slept on the streets of Paris on two different occasions and when the rats and cockroaches came out, he prayed and God told him to tell them that he was better than they were and they went away: 1

-Angry Spaniards threatening to call the police if we knocked more doors: 1

-Doors knocked and answered by a weird old Portuguese man who thought we were prostitutes even though we were dressed in sensible shoes, floor-length skirts, and frumpy sweaters: 1

Now for a little more humor:

Twice this week we had unexpected teaching opportunities. We were walking home one night and two rowdy teenage boys started trying to yell at us in English (this actually happens a lot)... I had had it with the cat-calls these little punks and so I grabbed the Book of Mormon out of my companions hands and stormed back to where these boys were. They probably thought I was going to kill them. I gave them the Book of Mormon and told them that it was a gift for them. One of them, Jamal, was a little awestruck and said "You can´t just give it to us without explaining it to us!" So we explained it. Or rather, I explained it while my companion was dying from laughter. He was really interested and he actually read some of it. We´re meeting him again this week.

Roughly the same thing happened when a group of construction workers cat-called us this week. I went back and gave them all pamphlets and explained a little of our message. I even committed one to be baptized. We called them later that week and they had read the pamphlet. They loved it and even said it resolved a lot of their doubts.

It´ll be an interesting day when they are talking in sacrament meeting about their conversion story:

"I was sitting on the street one day cat-calling at women and then two of them stopped; chewed me out; told me to repent, and then asked me to get baptized. Now I´m here..."

Two thoughts that I have had on my mind this week. The first is the power of the Atonement, or the sacrifice of Jesus Christ for us. Often we think of it as simply our sins being forgiven and being able to start fresh. I read a lot about the Atonement this week, and I realized that it was a lot more. The Atonement does get rid of our sins and the effects of them. But even more, it changes our hearts.

When we really take advantage of the Savior's sacrifice for us, we have the same reaction as the people who listened to King Benjamin in the Book of Mormon: "And they all cried with one voice, saying: Yea, we believe all the words which thou hast spoken unto us; and also, we know of their surety and truth, because of the Spirit of the Lord Omnipotent, which has wrought a mighty change in us, or in our hearts, that we have no more disposition to do evil, but to do good continually."

We also had a zone conference this week. We talked a lot about the Spirit and the function it has in the lives of our investigators. Truly it is the Holy Ghost that brings this change in our hearts. We can't change on our own, therefore we need to rely on the Spirit to testify to us that we do have a Savior and can be new people.

I had also realized that it does not matter how much study you do in the scriptures; how much doctrine you know; how many years you have studied religion; if you do not have the Holy Ghost with you, you will learn nothing. You may know a lot about religion afterward, you may be able to explain things, but without the Spirit you can not apply the Atonement to your life or be converted. It's like reading a science textbook without actually doing any experiments.

Con Cariño,  Hermana Sykes
Posted by Kathleen Sykes at 11:29 AM