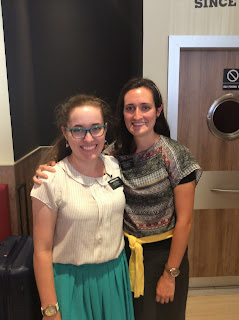 Sorry to all, but I've been really slow at updating Kathleen's blog.  Here are her two latest letters.  BTW, doesn't she look great?

I got transferred to Leganés! I was hoping to go up north or finish training Hermana Cheret, but I'm actually pretty excited for this. Leganés shares a border with my last area, so I'll probably see a lot of my friends from Barrio 3 again.

My new companion is Hermana Gálvez. Don't be fooled by the name. She's from Canada. And so are the other two girls that we live with. In case you didn't catch it, I'm the only American living with a bunch of Canadians. The accents... Also I'm living with my MTC companion. Small world.
I really like President Pack and Hermana Pack. President pack sounds like he's from California, but Hermana Pack has the most wonderful southern accent. They're both super nice. Even though they've only been out a little while, I'm really impressed with them!

Okay, now to the good stuff... S got baptized! By the skin of his teeth, but he got baptized. We had to have a few more heart to hearts with him, but he finally followed through. This stubborn and indecisive boy got baptized.

We were pretty nervous about him not getting through to the 4th because he had been so difficult about the day he got baptized (doing it on a specific day even though he had no reason for it etc). Also, I will add that two other people got baptized too. Happy birthday, America.
When we were waiting for him we called (we were calling every two hours to make sure he was actually getting out the door on time... Punctuality is an issue...) and he responded:

He got there and it went off without a hitch. It was actually a beautiful powerful ceremony. S bore his testimony at the end even though he didn't want to at first and said he really appreciated the work the three of us did with him and he loved this church because he was amazed about how correct it was. His wording.

His confirmation was another story... We made plans with him and a member to get him to church 20 minutes early. When we got there that morning he wasn't there... But the member was. We called him and the call went something like this:

He finally got there 15 minutes after the service started. The two other people were confirmed and S ran in as soon as the second guy was confirmed. His shirt was half open because he was trying to change on the way to the church. I took off his hat, which has his name on it by the way, pulled him in the door and pointed to the front of the chapel where he was to be confirmed. A few of the members were giggling. Our district leader said "well... That was good timing!"

The last day that I had in Barrio 3 was really great. First off, I need to applaud Hermana Cheret. I felt so good leaving the area in her hands. She'll be area training her new trainer, but she has a really good handle on everything.

We were in church that morning and several members came up to me to wish me good bye. A lot of them told me they didn't want me to go and a few even cried. Not that I'm happy about their sorrow, but it made me feel really special that they loved me so much. Actually... About 7 people cried. One is going on a trip to London and said she'd write me and send me cookies that I like from there. She also says she plans on visiting me in May when she comes to Salt Lake. I made some lifelong friends here. ALSO L told me he thinks I was one of the best missionaries to ever come through that ward. He's been there a long time.

We later went and visited some people who were really special to me. We visited Sa and Jr in order to explain the change. They were both really sad, but Hermana Cheret said some really inspired things with her limited Spanish that make be believe that they will stay. I also have a firm belief that many of the people I taught there will get baptized. I know that to be true.

At the end of the night, we visited Aa. She is one of my favorite people in the whole ward/world! We chatted for about an hour and then I wanted to leave her with a spiritual thought. When Hermana Sánchez was training me she put a scripture on the front of my planner. I put the same one on the front of Hermana Cheret's when I started training her. Doctrine and Covenants 84:88:
"And whoso receiveth you, there I will be also, for I will go before your face. I will be on your right hand and on your left, and my Spirit shall be in your hearts, and mine angels round about you, to bear you up."

I told her how I had a difficult few transfers in Barrio 3, and sometimes I wondered when I was going to feel the Angels bearing me up, but Aa always took care of me, my companions and investigators. I thanked her for that. She cried when I told her that. She really loved me and told me that she loved when I came to visit her. She said that she and Jr (they're relatives) talked about me often and that they really loved me and my desire to work hard. I want to be in contact with her forever.
I sometimes felt like I was really doing nothing in the ward, however, I really felt that the spirit was testifying to me that I had really made a difference for a lot of people in this ward.

Also this week was great for other reasons as well. We had a lesson with Jx, one of our most complex investigators. We were going to talk to him about the law of chastity, but I felt prompted to change the lesson, so we had a lesson on the Plan of Salvation. It was really powerful. He had been somewhat depressed lately, but he really opened up to us. We have asked him to be baptized 3 times before, but he refused every single time. This time he accepted at date in September. I told my Zone Leader about that and he was thrilled! He told me that he already looks Mormon.
We ended the week really well. It was good.
I love you all,
Kathleen

Sorry, yet again, this one will have to be short. My companion and I ate some weird fish the other day and she got really sick. We spent most of the day going to and from the Doctor in the center of Madrid today.

Other notable events this week: My companion lost her iPad. A bird pooped squarely on my nose while I was walking (astronomical odds on this one). We taught A TON of people this week. Most of the people we contacted were somehow related to an investigator or member. A Russian future investigator called me the enemy, I told him he won’t feel that way when we baptize him (He found that amusing).

This week was mostly me getting a handle on the area. We have only a few investigators, but I really like the ones we do. We have a bunch who are really prepared.

My companion was really pleased with this companionship and we´re getting along really well. She said that in the short week we´ve been together, she saw that a lot of these investigators perked up as soon as we started working together. They even appeared to be excited to meet with us.

We´re working with a family, Ax and her children, and they want to get baptized next month. They´re doing really well. They´ve been investigating the church for a little over a year now, and it appears that they are finally making progress. The theme with her and a lot of the other people we´re teaching is learning to teach them where they´re at, not where we want them to be.

A lot of people take the missionary discussions and sometimes they just go through one by one, even though they don´t really understand the content. We learned that with a lot of these people we had to rewind back to lesson one. It proved to meet their needs much better. It´s an important lesson to learn that we´re their to guide people to the Gospel, not drag them.

I´m really sorry with how short this. Crazy day and week!

I love you guys! I have in fact read your emails.
Love,
Kathleen
Posted by Kathleen Sykes at 1:47 PM