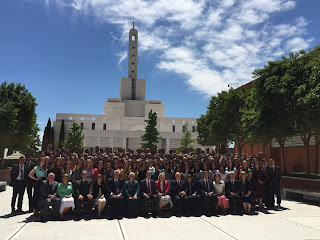 This picture has Kathleen in it.  If you look at Sister Jackson, in the red jacket, and look behind her and behind the Sister in blue, you can see Kathleen's eyebrows.  She is a little too short to be in the 3rd Row.


We have been quite remiss in posting Kathleen's emails, so we are going to catch up with excerpts from the last three.  Sorry for the delay.  We know everyone wants to know what she's up to.  So here they are:

This week was slow, but we still had some good experiences! Monday really started out strong when we taught a new investigator (M) who was really open to listening to us. She has cousins who are in the church and one that´s even serving a mission in the United States. She has a really cute family and seems like a really special person.

We are also teaching a boy named J. He is somehow related to Aa. We keep asking both of their families, but everyone gives us a different story, so we might never know. Nonetheless, he´s proven to have a lot of promise. He´s really liked meeting with us. We went to visit Aa this week and she asked us if we were teaching him. We told her that we were, and she said that apparently he was so excited about it that he was telling his non-member brother all about it. He´s a really sincere, sweet kid.

We taught Jx again, and he´s been progressing really well. He´s a really inquisitive person and he wants to know everything. He´s asked a few questions about the Word of Wisdom this week (mainly because the members kept telling him about the Word of Wisdom despite our efforts to control the amount of information he receives), so we decided to teach him about it. Since he´s been so curious about prophets and modern day revelation, we decided to give him a copy of Doctrine and Covenants and gave him a few things to study. He appears to be taking it all very well.

Also, this was a copy of Doctrine in Covenants that we found in our apartment. We didn't realize that two other missionaries wrote in it to a different investigator a few years ago, and we suspect that they never had the chance to give it to him. But we had the chance to give it to Jx. Our member at this lesson, C, saw Jx coming and told us "Quick! Cross out the other missionaries names and put your own in!" And so we did. Jx thought it was hilarious.

We've been really lucky this transfer to have a lot of people really invested in the welfare of our investigators. Ca, an older Spanish gentleman, took a real interest in Jx. He asks about him all the time and has even given us things like movies to let him borrow. We were worried that they wouldn't get along at first, but they really hit it off.

We invited him to meet Aa this week, and he loved being over there. Aa is always willing to just let us pass by with our investigators. She loved meeting him and we think he appreciated it as well.

Also, our district leader, Elder Gao, has really pitched in on helping S. He said he will invite him to go to appointments with him. He asks about him a lot. It´s really inspiring to see how much the people in our ward are working to help someone come unto Christ.

I've really put a lot of thought into what it means to depend on the Savior this week. I've felt discouraged at times and I've felt a little sick this whole transfer. Sometimes it felt like I didn't have any physical or spiritual strength to do anything. I've prayed a lot to know what to do and say that would carry me through a lesson, and we've had many good lessons that were really guided by the Spirit this week.

In response to the last email, here is what happened with transfers: The unexpected.

First unexpected thing, some of our investigators almost cried when they heard one of us was going to leave. It was good to know that we had a good relationship with them.

We received our phone call on Saturday night and I was just expecting to get something that went something like "Hermana Sykes goes to Barrio 6 with Hermana So and So and Hermana Griffin gets So and So."

What we really got was a lot more shocking. Hermana Griffin was told she was going to Barrio 8 and I was staying... To train another missionary.

Actually at first we were told that our area was closing, which was much more surprising considering that we had a lot of progression this last transfer. Luckily, one of us was staying. Nonetheless, I´m still really nervous for tomorrow when I pick up my new companion. Please pray for me. I really want to be a good trainer and help her be a good missionary.

I´m pretty sad about losing Hermana Griffin.I loved her and she was a really good missionary, friend and companion. I know she´ll do great in her next area.

Right now I´m having an adventure with Hermana Barkle. We´re companions until tomorrow. She only has been on her mission for 5 months and she´s whitewashing an area (Translation: The sisters before her both left and left the area for her and she doesn't know anyone or the area) AND she´s training.

She´s really worried, but I saw her spring into action immediately when we hit Móstoles and get to work. We planned for an investigator who has a baptism this Saturday and started sorting through the apartment for resources. We´re going to be doing a lot of preparation for her new companion tomorrow. She´s going to do a really good job. (Also on an unrelated note, she´s from Australia and is really cool!)

We saw some incredible miracles this week. We realized this week we really needed to find people, so we had dedicated about 4 hours this week looking for old investigators and street contacting. We found some very wonderful people including a Spaniard who told us he really needed the message we shared with him.

We also found a woman who was really excited to talk with us. I felt a pretty strong nudge to go and talk to her and I´m happy we did. She has family that are members and at least one cousin who is serving a mission in the United States. We stopped her when she was with her 4 year old daughter and she told her "Honey, shush. We´re going to listen to the nice elders." We thought it was pretty funny she thought we we´re elders but even happier that she wanted to listen to us.

S is plugging along really well. We invited a member to come help us go over the baptismal interview questions with him. He told us that he was at "85%" on Joseph Smith and the Restoration. He says he believes it and wants to believe it, but he´s not quite sure yet. Aj, the member we invited for this lesson who is a convert himself, was able to relate his personal experiences. Smith´s attitude started to shift a little. You can see more and more that he´s starting to develop a testimony.

J, Aa´s relative, is progressing at full force. He´s reading, praying and made it a point to come to church for all three hours this week. He even mentioned that he want´s to serve a mission. One of the Elder´s lent him his name tag to see how it fits. :)

Ja, our less-active member who´s coming back to church for the first time in 26 years, came to a baptism with us this week. She loved it. She said it brought back so many warm memories to her. We explained baptism to her later this week and the covenants we make. I bore my testimony of the Gospel of Jesus Christ and the sacrament. I remember the room was filled with the most wonderful feeling of the Spirit. She stared at us in silence for a few seconds and then told us she didn´t want either of us to go. It was really satisfying to me.

Also, as a side note, she´s a make-up artist. She did my make up this week as a nice, natural, day-time look. It was really pretty, but I felt like I was dressed up to go to the opera. :)

We met with a new investigator this week, Zx. She´s from Brazil and had met with the missionaries for some time in another part of Madrid until she lost contact. The elders brought her to English class one time and she sought us out afterwards to tell us that she wanted us to come by and teach her. The elders were a little confused, but were happy to pass the referral. She was so prepared to hear the Gospel. She loved the whole message and even wrote down scriptures we gave her. She had been sick for the last few months and we offered her a blessing. The elders came and gave her one and she said she had felt so much better when we were around her.

This is only a tenth of the awesome things that happened this week! I wish I could write more. I´ll talk with you next week. I love you guys!

Posted by Kathleen Sykes at 8:56 PM